"of or relating to the sky or visible heavens" - Western Exhibitions 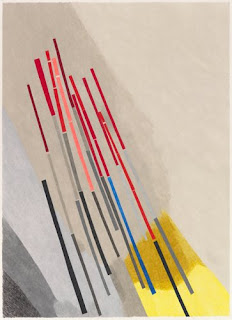 "of or relating to the sky or visible heavens"

Shane Huffman’s new large horizontal photograph is of a picture taken by the Hubble Telescope, overlaid by washes of semen and menstrual blood. His new photo series of images of the Moon, titled “Drawing Down the Moon”, are made by “drawing” with a camera lens on undeveloped photo paper outdoors in the dark of night.

Michelle Grabner’s Rainbow Flocking installations are unique site-specific works created by flocking and spray-painting directly onto the gallery walls. Lane Relyea provides an apt analysis in his essay, “Michelle Grabner’s Never Quite Happy Home” – an excerpt: Each of Grabner’s rainbows feels nothing short of a miracle. But her work also seems nagged by worries that mere prettiness and unearned euphoria are precisely how the promise and miracle of art are most often dismissed. It’s only by owning up to such doubts, without being defeated by them, that the work can take art’s promise of happiness seriously, and risk so much on it. Grabner’s rainbows are miracles, but common and everyday ones, appearing everywhere, in people’s gardens and on their rooftops.

Carrie Gundersorf’s drawings and paintings refer to astronomical images that are created by time-lapse photography, spectroscopes, computer-enhanced photographs, images from books and the Internet. She extracts shapes, lines, colors and patterns that serve as a starting point for compositional strategies. Her three new large drawings, color pencil and watercolor, introduce pictorial elements like diffusion to her elegant vocabulary that draws on the history and language of early modernist painting and found astronomical images to create tensions of past and present, touch and image, and science and craft.

Matthew Northridge’s “Who’s Watching the Time and Who Will Know When to Quit?” consists of a lunar globe whose surface has been altered by installing hundreds of rubber grommets. Suspended from the ceiling and situated at a height above that of the viewer, light registers through the porous sphere from different angles, revealing the object’s hollow interior.

“Circulator” by Melissa Oresky is a simply composed yet densely constructed painting of a sun or star-like sphere of accumulated debris that is all roiling tension – it presses itself insistently upon the viewer. Shards of yellows, grays and greens and poured areas of paint compete with abstract elements and linear nerve-like cells to present an orb in crisis.

This show will also feature a series of Stan Shellabarger’s “Contrail Photos”, archival inkjet prints in hand-made silver-leafed frames, of the trails made by jet planes. These works extend Shellabarger’s ongoing interest in how humans leave traces of themselves on the earth (by walking, scuffing, eroding, writing, etc.) into the sky.

Gallery hours:
Wednesday thru Saturdays
11am to 6pm