Images of Galloping Gertie at the Bridge Project 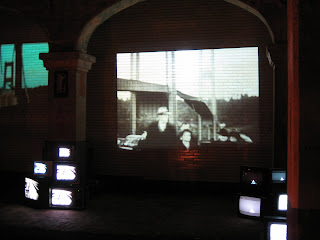 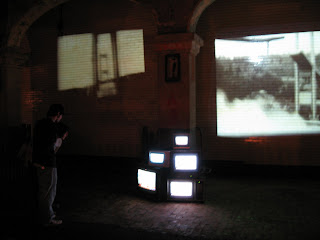 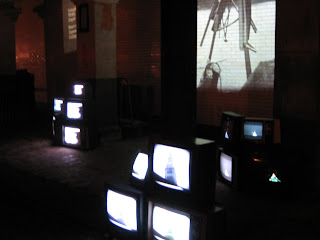 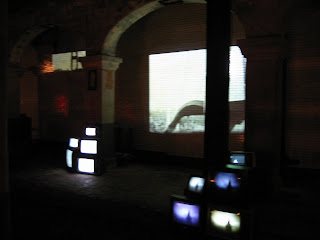 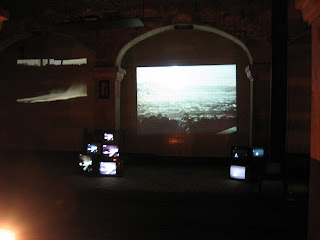 Galloping Gertie as part of the Bridge Project 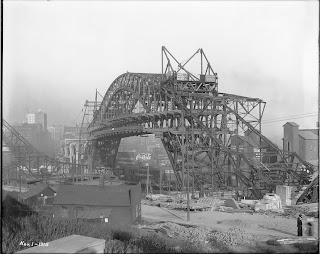 “Galloping Gertie”(2009)
A site-specific collaborative installation by Dana L. Depew and Matthew Bartel, in conjunction with the Bridge Project located on the Detroit-Superior Bridge – lower level.

Visual artist Dana L. Depew and filmmaker Matthew Bartel team up to present a site- specific installation that consists of multiple images and video projections of historical bridge collapses including the Tahoma Narrows Bridge in 1940 and most recently the I-35W located in Minnesota. The images will be projected against the existing white subway tile and also will also be broadcast on multiple televisions that will be scattered on the floor amongst concrete rubble and debris. The intent of this piece is to create an environment that forces the viewer to concentrate on their immediate surroundings. The ultimate effect will raise awareness and concern of the potential hazard that the adjacent Main Avenue Bridge holds. The Main Avenue Bridge has the same design as the I-35W and has become the target of much public scrutiny because of its current state of disrepair.

This experience will take place Friday September 25, opening at 4 pm, closing at midnight and continue Saturday September 26, from noon to midnight. It will be free to the public and include arts and crafts vendors, food and beverage vendors (including beer and wine), buskers and solo performers positioned across the great span of the bridge with the more complex installations and performances taking place at either end. The event will include, as at all Ingenuity events, most exhibits and performances are family friendly and each night closes with a musical event

SAT
SPACES WILL HAVE EVENTS SCHEDULED
SPARX IN THE CITY GALLERY HOP
TREMONT ARTS AND CULTURAL FEST - DANA DEPEW WILL HAVE A SPACE THIS YEAR TO SHOWCASE NEW QUILT WORKS. 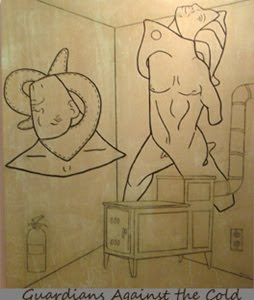 What's the difference between Modern Art and Contemporary Art? Many think that there is no difference. Many others would strongly disagree claiming there certainly is a difference! To clarify, Contemporary Art is work created by living artists whereas the paradigm of Modernity and the production of Modern Art ended with the beginning of the Pop Art Movement in the 1950's. Contemporary work is actually difficult to find outside of the decorative paintings that usually inhabit most galleries whose only concerns are for sales and income. Those are not bad concerns in themselves...

However, there is a place in Tremont that exists only for exhibition, that is to say,to present the different facets of contemporary work created by local and residential artists without regard to ornamental marketability. Dana Depew, owner of the Asterisk Gallery and artist himself, will tell you that ‘the value of the Gallery far exceeds the payment’...of keeping it open. He will also inform you that when he started it eight years ago it was to be a ‘strictly exhibition’ space unconcerned with income from sales.’ He said he wanted a place whereby the artistic community and the community in general ‘benefits from excellent work and synergy.’

Currently on display at the Asterisk Gallery, 2393 Professor Avenue are 24 works by Mathew Dibble in a show he has entitled, ‘Equipping the Shop for Action.’ His works have primal power, filled with strong lines and figures that are both allusive and symbolic. Informed by what presents as a Formalistic Neo-Synthetic Cubism, the paintings are large and linear, the drawings small, but captivating. Rest assured that that description falls far short of the pure impact and presence he creates with this selection of his newest work on display. He harbors an ongoing and subterranean passion that he infuses into his lyrical lines on both paper and canvas. Mathew has been creating Art for more than thirty years and his work hangs in both private and corporate collections.

SLIDESHOW AT MOCA - CALL FOR SUBMISSIONS

CALL FOR ARTISTS:
The CWRU Graduate Art History Association invites art students from Northeast Ohio colleges and universities to submit work for presentation at STUDENT SLIDESHOW @ MOCA, Wednesday, October 28th, 2009, at the Museum of Contemporary Art Cleveland, 8501 Carnegie Avenue, Cleveland, Ohio.
Monetary awards will be given to the top three artists selected by jurors Ann Albano of the Sculpture Center, Pam Jaffe of the Cleveland Foundation and Seema Rao of the Cleveland Museum of Art. For detailed submission guidelines, please see http://www.facebook.com/slideshowatmoca.

This event is made possible by the generosity of the CWRU Department of Art History and Art, the CWRU Friends of Art and MOCA Cleveland.

Featuring over 47 artists and 5 galleries across 10 buildings, City Artists at Work – a seminal member of The Art Quarter will host its Open Studio event, free of charge, on Saturday September 12, from 12pm - 7pm, located along and adjacent to Superior Avenue, between East 18th and East 40th Streets.

Unique offerings this year include "Spicy Dames & Tales of Mystery", an exhibition of work by Mallorie Freeman on display in William Rupnik Gallery, #1A in The Loftworks building. Artefino will have a rotating exhibit of Tower Press artists and a CAAW artists exhibit will be on display in the lobby & second floor of The Plain Dealer building. Many artists will be demonstrating and providing hands on art projects for all ages.

Pick up an "Art is the Key" tag and key ring at any artist's studio. Bring the key ring with you as you tour CAAW studios & collect unique, free works of art, sized to fit your key ring and made especially for this event. The more studios you visit the bigger your key ring art collection will become.

Gallery Hours: Wednesday to Saturday, 11am to 6pm


Western Exhibitions will open two new shows on Friday, September 11 with a public reception from 5 to 8pm. In Gallery 1, PAUL NUDD will show new paintings, drawing and collages. In Gallery 2, DAN ATTOE will present one new painting and several of his "daily drawings". Please also join us on Thursday, September 24 for a gallery talk with Paul Nudd at 6pm.

Paul Nudd will pack the gallery with new paintings and drawings inspired by and depicting what the artist calls the "peri-anal universe". Although his muse is an abject one; the works can't help but reveal a strange and elegant beauty. The works' coloristic and formal contrasts, as described below, are manifestations of Nudd's primary interest: the decaying natural world as seen against the artificiality of the made world.

The paintings on canvas refer to microscopic lifeforms, often looking like exceptionally well-designed bacterial samples squashed between two glass slides. Nudd refers to the works' primary compositional elements as "blobs" - oval shapes, painted or collaged onto the raw canvas, that are replicated in varying sizes and colors (usually earth tones, but also shocking pinks and reds) across the canvas. Occasionally, the artist's blobs are punctuated with low-relief "nuclei" crafted from nuggets of modeling clay in high-keyed colors. Nudd's color flips back and forth between differing approaches to the visceral; pop-candy colors vibrate against the dingy fake vomit tones; unbleached titanium clashes with fleshy hues.

At a glance, the paintings seem busy, out of control - randomly mixed colors and shapes. But dedicated viewing reveals the paintings to be carefully composed portraits of filth and decay: gooey puddles, fussy swaths of sludge, scumbles of strange substances, delicate stains, wisps of string, hair, felt and fake vomit settle on the plain of the blank canvas like scabs on smooth skin.

Despite the artist's self-proclaimed efforts to make "gross-out" art, Nudd's paintings are perversely attractive, disgustingly hilarious and infinitely engaging. As Anthony Elms notes in a recent essay on Nudd's work, "See, it is possible to giggle, panic, and squirm at the same time, and that is what Paul's artwork consistently aims to induce." Nudd maps a world - or as he says, a fishtank - of bacterial delights. As he states in a recent interview with Evan Lennox (available at the gallery), "I don't aim to offend anyone; on the contrary, I want people to engage with my work for as long as possible. I just think there is an entire abyss of color combinations, forms, textures, and approaches to making things that people need to see. Crust, slop, and meditations on fake vomit and its uses are all interesting points of departure."

This is Paul Nudd's second solo show at Western Exhibitions. Recent solo and two-person shows include Jack the Pelican Presents in Brooklyn, telephonebooth in Kansas City and the Hyde Park Art Center, Bodybuilder & Sportsmen, and Dogmatic, all in Chicago, and group shows at Andreas Bruning Gallery in Dusseldorf, the Evanston Art Center, the Soap Factory in Minneapolis, and Mixture Contemporary in Houston. He recently completed a collaborative printmaking residency with Onsmith at the Spudnik Press in Chicago and his zines and artist books are in several institutional artist book collections across the country. He is a recent recipient of an Illinois Art Council grant. Paul Nudd received his MFA from the University of Illinois-Chicago in 2001 and he lives and works in Berwyn, Illinois.

The shock rocker (and now horror film director) Rob Zombie's floating head looms over 6 pairs of kayakers on a melancholy seascape in Dan Attoe's new oil painting, "Sea Kayakers (You Are Not Special)". The Zombie apparition, a recurring prophet in Attoe's work, spouts a cryptic aphorism, in text delicately rendered by the artist. Is this phrase directed to us, the viewers, or to the kayakers, or both?

"Sea Kayakers (You Are Not Special)" anchors Dan Attoe's solo show in Western Exhibitions Gallery 2. He will also present several "daily drawings", an extension of a past project of making a small painting every day over a couple of years. In these drawings, Attoe illustrates whatever is holding his interest at the moment, be it a Far Side cartoon, rock and rollers, whatever happened in the local bar last night, a scene from one of the Pacific Northwest's legendary strip clubs, or a depiction of the Pacific Northwest's legendary topography. He uses these drawings as foundations for paintings and neon sculptures and makes them in a stream of consciousness manner, letting the images, text and ideas that pop into his head make their way onto the paper. Attoe states in a recent interview, available at the gallery, that "there is no overarching theme to my work, there are things that pop up frequently because of where I live, or because of things I was interested in as a kid, etc. I like to leave the subject matter open to interpretation."

This is Dan Attoe's second solo show with Western Exhibitions. We also hosted his collaborative installation troupe Paintallica for a wild show in 2006. Attoe will be having a concurrent show at Peres Projects in Los Angeles, with whom he has had 5 prior solo shows. Other solo shows include MUSAC in Leon, Spain, Vilma Gold in London and 404 Arte Contemporanea in Naples. Group shows include the Museum of Contemporary Art in Bordeaux, France, AMP in Athens, Galleria Maria de Cardenas in Milan, the Saatchi Gallery in London and the Portland Art Museum in Oregon. His work has been discussed in Artforum, Artforum.com, Contemporary, Paper, Los Angeles Times, Art Review and LA Weekly. Paintallica recently completed an installation at the Country Club gallery in Los Angeles. Dan Attoe received his MFA from the University of Iowa in 2004 and he lives and works just outside of Portland, Oregon. 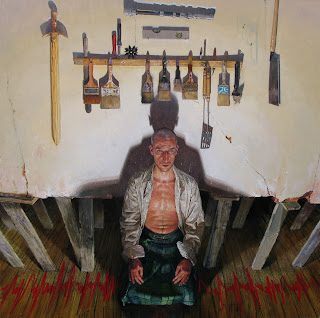 Paul Beel received his BFA and MFA from the School of Art at Bowling Green State University, Ohio. He did Post-Baccalaureate work at Studio Art Centers International, Florence, Italy, where he later taught painting and drawing. He has had solo shows in Venice, Milan, Florence, Mantova, as well as in the US, and group shows in Spain, Germany, San Marino, Switzerland and throughout Italy. Paul Beel is represented by is Bonelli Arte Contemporanea in Mantova. He lives and works in Florence.