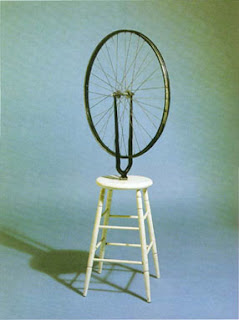 "In 1913 I had the happy idea to fasten a bicycle wheel to a kitchen stool and watch it turn." - Duchamp, Apropos of Readymades, 1951

Actually made prior to the artist's coining the term, this Readymade is commonly termed the first of Duchamp's Readymades. Duchamp himself has confirmed this claim, but also glories in the inherent contradiction of such a designation. The piece was made when the idea of the Readymade had not been fully developed and yet, as a result of being called "No.1" in the long line of Readymades, it has received as much (if not more) attention than later, more clearly established Readymades. Duchamp explained his personal feelings and the motivations behind Bicycle Wheel in an interview with Arturo Schwarz in the 1960s:
"The Bicycle Wheel is my first Readymade, so much so that at first it wasn't even called a Readymade. It still had little to do with the idea of the Readymade. Rather it had more to do with the idea of chance. In a way, it was simply letting things go by themselves and having a sort of created atmosphere in a studio, an apartment where you live. Probably, to help your ideas come out of your head. To set the wheel turning was very soothing, very comforting, a sort of opening of avenues on other things than material life of every day. I liked the idea of having a bicycle wheel in my studio. I enjoyed looking at it, just as I enjoyed looking at the flames dancing in a fireplace. It was like having a fireplace in my studio, the movement of the wheel reminded me of the movement of flames" (588).

At other points Duchamp has offered further explanations including the following: "Obviously, the wheel must have had a great influence on my mind, because I used it almost all the time from then [1913] on" (Moffitt 230). He has also added,

"Please note that I didn't want to make a work of art out of [Bicycle Wheel]. The word 'Readymade' did not appear until 1915, when I went to the United States. It was an interesting word, but when I put a bicycle wheel on a stool, the fork down, there was no idea of a 'readymade,' or anything else. It was just a distraction. I didn't have any special reason to do it, or any intention of showing it, or describing anything. No nothing like that..." (Cabanne 47).

And so the Bicycle Wheel was not intended to be a remarkable piece of art, but rather a personal experiment. However, just because the initial idea behind it wasn't art-oriented doesn't mean that Duchamp didn't whole-heartedly embrace the wonderful uproar and contradictions it later acquired when becoming designated as art.

Most attest that the stool in Bicycle Wheel is a kitchen stool, but Ramirez argues that it is in fact a draughtsman's stool, forming quite a developed argument. He also reminds the viewer that this Readymade may be closer to a construction than a Readymade object, stating that "it is almost impossible" to see the front wheel of a bicycle with its fork separated off from the rest of the frame (32). The fact that the artwork incorporates neither a signature nor an inscription further supports this claim.

This Readymade embodies Duchamp's interest in kinetic energy. It incorporates two simultaneous actions: the wheel on its own axis and the fork spinning in the stool. It begs to be spun (Ades 161). This pointless rotary movement of the wheel has been compared to sexual action, specifically that of masturbation (Ramirez 33). Duchamp's enjoyment of the Bicycle Wheel, the game of chess, and the flames in the hearth are all related to his interest in pointless motion; they all move constantly, but essentially remain rooted in the same place. This concept of inconsequentiality links directly to the sexual ideas in the Large Glass and many of the other Readymades.

Duchamp always maintained that the Bicycle Wheel and the rest of the Readymades were a very "personal experiment," which he never initially intended to show to the public (Girst 4). In fact, Bicycle Wheel wasn't formally shown in a gallery space until 1951, and by then the original had been lost. Duchamp's sister Suzanne allegedly threw out the original along with several other early Readymades when cleaning out the artist's studio on the rue Saint-Hippolyte in Paris after his move to the United States in 1915 (Tomkins 158). The fact that Moffitt goes as far to say that this piece is a "mandala-like artifact," stands as clear evidence of the over-attention that this glorified "first Readymade" has received over the past decades (229).