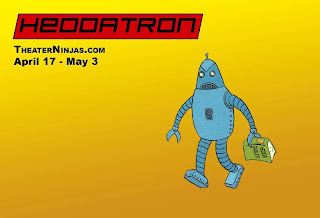 "Heddatron" is the story of a pregnant housewife who is kidnapped by robots and taken to the Amazon rainforest where she is forced to perform Henrik Ibsen's 'Hedda Gabler' over and over again. Meanwhile, her family plans a rescue attempt and back in 1890, Ibsen struggles to write a new play. Intelligent, funny and surprisingly poignant, "Heddatron" includes the only human-robot musical number on Cleveland stages this year.