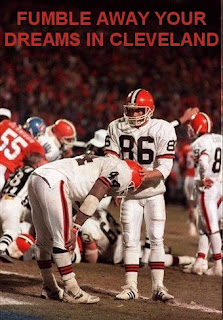 In American football, The Fumble refers to a specific incident in the AFC Championship Game between the Cleveland Browns and the Denver Broncos on January 17, 1988 at Mile High Stadium. With 1:12 left in the game, running back Earnest Byner appeared to be on his way to score the game-tying touchdown, but lost a fumble at the 3-yard line.
Background
During the game, the Broncos jumped to a 21-3 halftime lead, but Browns quarterback Bernie Kosar led them back with 4 second-half touchdowns. By the middle of the fourth quarter, the game was tied 31-31. The Broncos then took the lead on a long drive that ended with a 20-yard touchdown pass from quarterback John Elway to running back Sammy Winder, making the score 38-31 with 4 minutes left in the game. Cleveland responded by advancing the ball down to Denver's 8-yard line with 1:12 left, setting the stage for the play that would make this game one of the most famous games in NFL Lore.
The play
Browns running back Earnest Byner took a handoff and appeared to be on his way to score the game-tying touchdown. But he was stripped of the ball by Broncos defensive back Jeremiah Castille, and fumbled at the 3-yard line. The Broncos recovered the ball, gave the Browns an intentional safety, and went on to win 38-33. While Byner took a lot of heat from Browns fans and the media for his fumble, what is often overlooked is that he was one of the main reasons Cleveland came so close to winning the game. He had a superb performance with 67 rushing yards, 7 receptions for 120 yards, and 2 touchdowns.
Reactions
On a broadcast of "ESPN Classic: The Fumble, the Story of the 1987 AFC Championship", head coach Marty Schottenheimer analyzed the play, showing that the fumble was not entirely Earnest Byner's fault. Schottenheimer states: "The wide receiver [Browns Wide Receiver, #84, Webster Slaughter] is supposed to take 10 steps then block [Denver Broncos cornerback Jeremiah Castille] to the outside. Instead, he wanted to watch the play."
Castille himself had this to say: "I was thinking, 'I got burned the last time I tried to bump-and-run this guy (Slaughter)', so instead I stepped back 6-to-8 yards before the snap, so I could better see the play unfold. I saw it was a draw play and that Byner had the ball. I remember thinking that Byner ran all over us that entire second half, so there was no way I was going to tackle him. Instead, I went for the ball the whole time."
Schottenheimer further defended Byner: "Earnest never saw Castille coming. Earnest was the reason we were still in the game at that point. He had several heroic runs and catches over the course of the second half that allowed us to have a chance to tie the game at 38. All of these heroics, unfortunately, were overshadowed by a single draw play from the 8-yard-line."
Dick Enberg, one of the announcers of the broadcast on NBC, had this to say: "And wasn't it ironic that Denver got the ball back on the 2-yard-line? Wasn't it just 1 year ago where the Broncos were on their own 2 before putting together what became 'The Drive'?"
Aftermath
Despite being primarily remembered for "The Fumble," Byner went on to have an extremely successful career. After spending another year with the Browns, he was traded to the Washington Redskins prior to the start of 1989 season for running back Mike Oliphant. In his five seasons with Washington, Byner was selected to play in the Pro Bowl twice (1990, 1991) and won a Super Bowl ring with the team in the 1991 season. In that season's Super Bowl XXVI, in 1992, he caught a touchdown pass in the first quarter, and the Redskins won, giving him the NFL Championship ring he could not win with the Browns.
He ended up going back to Cleveland for two more years, and then finished his career in 1998, after spending two years with the transplanted Baltimore Ravens. In his 14 NFL seasons, Byner rushed for 8,261 yards, caught 512 passes for 4,605 yards, and scored 72 total touchdowns (56 rushing, 15 receiving, 1 fumble recovery). At the time of his retirement, Byner ranked within the NFL's top 30 all-time leaders in rushing attempts, rushing touchdowns, rushing yards, and total yards.