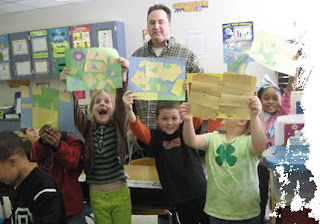 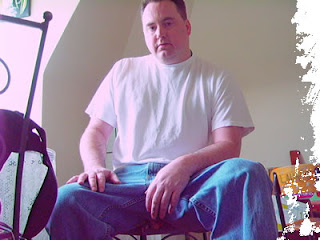 Profiling Visual Artist John Howitt
from CoolCleveland.com Feb 25, 2009
One of Cleveland's current cool artists is painter/musician John Howitt. Howitt is originally transplanted from the Toledo area and moved around as a child. He attended the Kent State School of Art in the 1980's to study art and play music. While a young student at Kent, he joined the band Fuzzhead where he still remains today. As an undergraduate at Kent, he studied with abstract painter Craig Lucas and focused on drawing and painting. When he moved to Cleveland after graduation, Howitt wound up creating several murals for corporations and restaurants during the downtown revitalization of the 1990's. With this early success he was able to found his own small business (OM), support himself and still create his art.

On occasion he has worked with children (see photo below) in the classroom as a visiting artist and feels this can be where a local artist can really make a difference. " Working with children, talking to them about how color might taste or smell really draws them into the creative process while still their encouraging imagination to have fun!" claims Howitt. He has continued to make music solo, in Fuzzhead, paint and participates in local exhibitions in the Cleveland area on occasion. He has exhibited his work recently at local spaces such as the Wooltex Gallery, Asterisk and True Art.


When I sat and spoke to John, I asked him why he stayed in Cleveland. His band has done well, he could have gone to a big city with bigger venues to play out at or a city with more exhibition opportunity.


"I love Cleveland, inexpensive for an artist or musician but mainly for it's rich history. Having moved around from Detroit to Toledo in the 1980's, living out in Kent and eventually here has been a positive experience," he said. "I enjoy living on the 'north coast,' creating art or music and find the reception from the region very good at times."


Howitt's paintings are abstract, vivacious and often are influenced by graffiti and street art as John claims to be an outstanding breakdancer from his Detroit days. His works on canvas are colorfully bright forms which contain many layers of stencils, paint and line. Howitt's artist statement on his website speaks to his understanding of order applying to not only music but his visual works as well.


"I believe the aspects of a good jazz composition –harmony, color and placement are important and reflected in my work, whatever form it may be. My paintings are conceived and subsequently executed with experimental color placement—just as a musician forms a melody through experimenting. By placing colors on canvas, I can create harmony or disharmony…bright and concise with a rhythm that shouts at the viewer-- something on key, something off key. To me, each painted mark is as a note is in leading to a finished composition and as such I view each painting as a 'session'—just like a jazz session."

When asked about his role in being a cool cultural icon to Cleveland with his double-duty, Howitt felt his contributions are split equally between the visual arts and the musical factions he participates in equally. "Historically, Cleveland had so much to offer to contemporary music, classical and even jazz. For someone creating music, there is much to draw from where we've been."


Currently, Howitt is creating music from his studio in South Euclid, looking for a new space. He is teaching himself different software programs in design to possibly interface with some of his new collages. He is available to speak to your art classroom as a visiting artist. His work is being represented privately in Chagrin Falls and you can see some of his artwork on his website.

Ginley hosts the "Erie Effusion" radio program on WRUW 91.1-FM and is a well-established Cleveland artist. You can find her online at http://erieeffusion.blogspot.com and http://www.bridgetginley.com.

A note from the author: This year, a goal of mine is to use my writing to promote positive attributes of our region. In speaking with many other visual artists -- all lamenting on the state of press swirling down the bowl -- I began thinking about what would be beneficial to an (artist) individual in terms of visual art? Where can our region grow in that regard? How can we help make this happen as sculptors, crafters or filmmakers? And how cool is Cleveland for an artist? I have hunted down a few of Cleveland's active visual artists in an effort to find out how they see themselves in our regional landscape and look forward to introducing you to some of these artists working in your community during the coming weeks and months. My intention is to bring the artist in their studio directly to you. -- Bridget Ginley