PINK EYE MAGAZINE dares you to attend an event, SHOCKING in its magnitude of eccentric, artistic PERVERSION 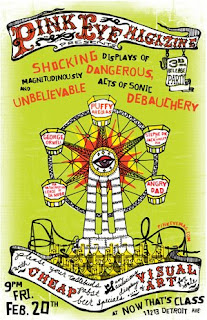 PINK EYE MAGAZINE dares you to attend an event, SHOCKING in its magnitude of eccentric, artistic PERVERSION.

Join the brave, as a third issue of PINK EYE MAGAZINE is released upon the unsuspecting masses of innocent bystanders on the Friday night of February 20th at NOW THAT'S CLASS (11213 Detroit Ave., Cleveland)

Don't be afraid to turn your head in SHAME as finely formed PUFFY AREOLAS disbelieve your eyes with INCREDIBLE acts of electric STIMULATION.

God fearing individuals - close your ears! As a drunken, debauching ANGRY DAD serenades all sinners with poetics so BASE, so CRUDE, damnation is sure to follow.

In a display of MORBID fantasy, fascination and magic, see GEORGE ORWELL rise from the tomb, and predict the future through UNBELIEVABLE audio hypnosis.

RA WASHINGTON IS LEROI DA MOOR, an individual of such tumultuous and FIERY a disposition, the foundations of tradition may never recover their dignity.

Witness a DANGEROUS, improvisational, high flying trapeze show, as the STEPHE DK AND JACK SMILEY DUO grace the center stage with aural curiosities sure to make a grown adult SCREAM louder than a kindergarten child during recess.

And all the while, please your taste-buds with CHEAP Pabst Beer Specials and an AUDACIOUS display of affordable VISUAL ART for sale.