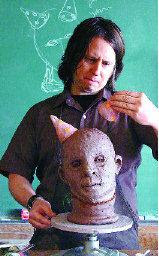 Exhibit sherrie gallerie
His heads rise above the rest
Sunday, September 14, 2008 3:49 AM
By Kaizaad Kotwal
For The Columbus Dispatch

His fragmented human-based forms are meticulously crafted and ooze creativity. A new selection on view in Sherrie Gallerie leads viewers into a strange yet irresistible world.

In his most recent work, Bartel focuses on heads -- some human, some doll-like, others resembling mummified remains. The exhibit presents a dizzying array of characters and emotions.

Green With Love places a pudgy, bald head against a floral-patterned heart backdrop. The head's creepy gaze combined with the cute, romantic motif is both alarming and humorous.

Red Demon Head is downright scary. The eyes in this piece, as in most Bartel works, are the key to understanding it.

Even his simplest forms are layered with narratives and emotions.

Bartel said he chose ceramics as his medium because "I cannot do what I do with any other material or process -- it chose me."

He begins with a rough idea and considers his role as "a conduit between materials and ideas."

"More often than not, I am following the lead of the material and/or creative process rather than directing it."

Bartel's surface treatments are critical. He likes to "confront the viewer's attention with the outermost skin of the work."

His carefully chosen patinas and textures are sometimes painterly; other times, they are selected to create weathered and corrosive looks "that reveal the history of an object." For evidence, look at Gnashing Teeth Head.

Because his work is far removed from traditionally "pretty" art, Bartel said he is often surprised that it sells.

"I was informed, long ago, by an old wise man, over a game of badminton, to 'never make work for a gallery.' This taught me that to make lots of good work for myself must always come first, no matter the audience, and everything else will take care of itself."

He said he thinks that viewers bring their own "baggage and stories" to his work.

"I find this framework to be more engaging and participatory for the viewer," he said.

"A smile is often easily understood; however, a more ambiguous expression is more difficult to digest. It's unsettling, not easy."