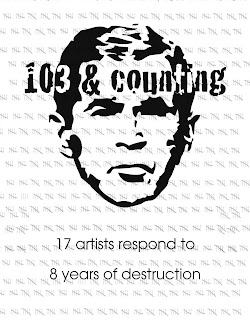 Counting Days features art as political dissent, largely absent from our current times of historical turmoil. 17 artists counter the apathy and engage in “anti-American activity” to show their true colors as real American Patriots – loyal to the notion of freedom and human rights - concepts our founding fathers died for. Exercising the freedom of speech is patriotic.

The artists respond to a Bush legacy of death, debt and deceit... the erosion of U.S. reputation in international opinion, the environmental destruction and the dismantling of environmental protections, corporate control of government, unprecedented fiscal deficits, collapse of the finance industry and home foreclosures, the disempowerment of the working class and the rejection of minimum wage and living wage, largest discrepancy in private wealth – surpassing that of the Great Depression, shifting of the tax burden and the free-for-all environment granted corporate elites, sanctioning of torture, Guantanamo, the evisceration of the 1st Amendment and American’s personal privacy, granting immunity to communications corporations ordered by the government to disregard federal law, the indoctrination of religion into government, blatant disregard for international law, U.N., World Court and domestic law meant to curtail abuse of the administrative office, education system failure, absent federal response to Katrina and the “cleansing” of New Orleans, the multitude of Americans without healthcare, the demise of competitive bidding in the granting of federal contracts, Blackwater, and an unprecedented effort to privatize Social Security. Did we miss anything?