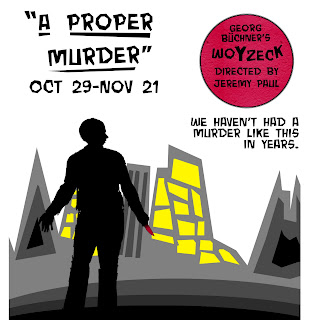 CLEVELAND, OH – Theater Ninjas return with “A Proper Murder”, Georg Büchner's classic play ‘Woyzeck’ brought to life at Asterisk Gallery in Tremont. Equal parts epic drama and dark comedy, dream-world and slice-of-life, Theater Ninjas' production of "A Perfect Murder" is an exciting chance to see one of the greatest modern tragedies ever written. “A Proper Murder” follows a poor soldier trying to scrape together a living for his family. Beaten down by life, he is driven over the brink into madness by his lover’s infidelity. The play was unfinished when Büchner died in 1837 and lost for almost 40 years. Since its re-discovery, it has been hailed as the first ‘proletarian tragedy’ and transformed into multiple operas, films and musicals. The kick-off show of Theater Ninjas’ fourth season, “A Proper Murder” is partially funded by a grant from the Cuyahoga Arts & Culture Fund.

Theater Ninjas was founded in 2006 and performs original works and interpretations emphasizing accessible stylistic experimentation, drawing on elements of physical theater, film, improv comedy, dance, and graphic novels. The Ninjas also offer a chance for up-and-coming artists to develop their craft while providing affordable experiences that entertain, provoke and excite the next generation of Clevelanders.

More information and tickets are available at http://www.theaterninjas.com/.