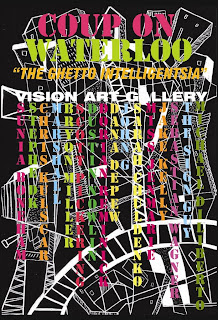 At least 100 artworks of all kinds are on view at Vision Gallery, which for the past six months has occupied True Art Gallery's former storefront space at the corner of Waterloo and 156th Street in Collinwood. But the first thing you see may be the most memorable. It's hard to miss, since it hangs about a foot off the floor, just opposite the front door, and is roughly the size of a large hot-water tank. Actually, it was a hot-water tank until artist Dana Depew got his hands on it. At this point it's a cross between a chandelier and a blimp - something Depew calls a "Seussian Spotlight." This is a genre of object Depew invented years ago and first exhibited at Jean Brandt Gallery. Cleveland arts audiences have seen examples there and at Asterisk Gallery in Tremont, where they are on more-or-less permanent display. Part of the fleet is now hovering at Vision, made from various kinds of skinny or squat tanks, painted in funky colors and sometimes trimmed with fur and sprouting light bulbs and frilly glass shades. Are they oversize spuds, changed into interior decor by someone's fairy godmother, or starships from a galaxy with a sense of humor? Whatever they are, they're both funny and uniquely Depew's.

Curators Sunia Boneham and Michael DiLiberto explain that the show's title, Ghetto Intelligentsia, refers to "the Jewish ghettos in Europe and the idea of the underdog coming back - people who have to be very resourceful, with the wider perspective and insight that comes with that." DiLiberto adds, "All the artists in the show are friends. They know each other from Cleveland's neighborhoods, and most haven't shown together before. For me, I guess 'ghetto' refers to poverty or to the facts of lower-middle-class life. What brings these works together is that they're accessible to anyone."

A little bit of everything is stuck on the walls or dangles from the ceiling. Thematic coherence isn't the goal here - just a presentation of creative ferment. Viewers are invited to dive into the mix, weaving between wildly various inner visions as they dodge around Depew's light fixtures. Miss JenMarie's four large, dark oil-on-canvas paintings, for instance, deal with issues of emotional isolation and love's weary ambiguities.

Titles like "It's Almost Like We Died Entwined" and "We Are Forgetting How to Feel" explain imagery that might otherwise be hard to interpret. They describe two roughly 4-foot-square canvases, the first of which shows two stags lying head-to-head, their antlers twisted together. In the second, two grizzly bears lie near each other; one looks depressed, the other frustrated.

If you've ever rocked out at Collinwood's Beachland Ballroom or the Grog Shop in Cleveland Heights, you've seen Jake Kelly's work. Following in the footsteps of Cleveland artists like Derek Hess and Clay Parker, the phenomenally prolific Kelly has produced more concert advertisement images than he or anyone else has bothered to count, covering an enormous imaginative range and filling an often anonymous but exciting niche jammed between art and music. Several of Kelly's larger, typically phantasmagorical marker-on-paper drawings are on display in the front gallery, while in a smaller room in back, a photocopy 'zine of 420 recent Kelly flyers is for sale. The collection is entirely mind-boggling.

Monsters, zombies and undead freaks of all stripes (sometimes they really are striped) congregate in these masterly works, often muttering off-the-wall soliloquies or snippets of dialogue. In an illustration for a Beachland show where the band Frank Black & the Catholics had top billing, Kelly presents an X-ray-like drawing of two skeletons doing their best to make posthumous love. One says to the other, "You bored yet?" Overall, the humor is more Goya than Charles Addams, but another Beachland flyer owes something to both: Kelly shows a girl singing Phil Spector's 1958 classic lyric, "To know, know, know him …" as she cradles a man's severed head against her plaid shirt.

Some of the art at Vision walks a wobbly line between categories like outsider and curbsider, resembling garage-sale items that you know you'll be able to pick off the berm the next trash day. But that just makes the viewing challenge of the show - which at times is startlingly like an East Village punk bazaar a couple of decades ago - all the more interesting.

Don't mistake the anonymous Sign Guy's art for stuff in the curbside category, even though its usual venue is the street. As his pseudonym indicates, this artist improvises signage, which he attaches to Tremont fences and utility poles, intending to inform, enlighten or just amuse passersby with cheery, talking cartoon animals, most of which have something trenchant to say. Some warn against drugs or crime, like one called "Gangland Birds," which features two little birds in backward baseball caps, mugging a third. Or there's the bird with no self-esteem issues, chirping "Vote for Me". Cleveland Scene's Michael Gill recently wrote a piece about the Sign Guy's contributions to public art, and if that piqued your curiosity, the show at Vision is the place to check out a wide selection of his work.

While not exactly a survey of Cleveland's alternative art and music scenes, The Ghetto Intelligentsia hits some of the highlights, showing not only Kelly's crossover art but some remarkable paintings by Scott Pickering, who has been one of Cleveland's better-known underground figures for a couple of decades. His splashy, semi-grotesque figures, which could be called a little bit Basquiat and a lot Dubuffet, are always among the most interesting paintings in any show that includes his work. There are many, many others worth at least a quick look, and any left out are likely to be found across the street at Art Collinwood's annual Members' Show, another exhibit packed with surprises. Several of Cleveland's best artists - Randall Tiedman, Scott Pickering (again), Joan Deveney, Jacob Wesley Lang, William Schwartz, Paul Sydorenko and 26 more - will be on view in that location through September 13.

The Ghetto Intelligentsia was advertised as The Coup on Waterloo, but as curator Boneham observes, "People were nervous about showing here" following the break-in and theft of an entire exhibit, which forced co-gallerists Joan Deveney and Jim Tomko to shut True Art Gallery's doors early this year.

As Boneham says, "The real coup was to bring this gallery back."