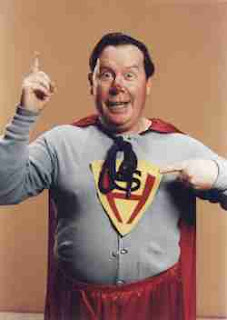 Superhost was a character portrayed by TV personality Marty Sullivan at independent television station WUAB-43 in Cleveland from 1969 to 1990. He wore a baggy suit, cape and red nose (like a clown version of Superman) to host the station's Saturday afternoon monster movie.

The show would begin at noon with an hour called "Supe's On," generally an hour-long warm-up to the movies with a Laurel and Hardy short sandwiched between two Three Stooges shorts. Superhost would appear between these, cracking jokes and talking to the TV audience.

He'd greet fans with his famous "Hello, dere" and follow with sketches like "The Moronic Woman," "Caboose Supe" and "Fat Whitman." His most famous Super Host bit was a takeoff on "Convoy," the popular trucker song. He was also known for referring to the movies as "flicks" as in "Let's get back to da flick."

After "Supe's On" was finished, he would host the afternoon of films called "Saturday Mad Theater." Generally two films were shown: an old horror film such as "Frankenstein" followed by a Japanese monster film such as "Godzilla."