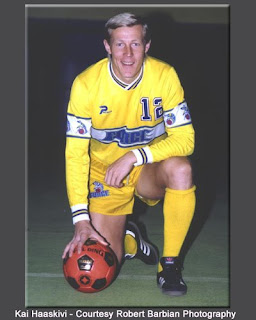 The 178 cm midfielder began his NASL career in the summer of 1978 with the Dallas Tornado. Haaskivi played in 1979-80 with the Houston Hurricane and 1981-82 with the Edmonton Drillers. He led the league in assists in 1981 with 21 and helped the Drillers win the '80-'81 NASL indoor championship. He finished his NASL career with 112 points in 135 games.

Haaskivi began his MISL career in the league's inaugural season of 1978-79 with the Houston Summit. Playing the next season with the Summit as well, he was named an MISL all-star in both seasons. The team lost the championship to the New York Arrows in 1980.

Haaskivi went on to star with the Cleveland Force (1982-83 through 1987-88), Baltimore Blast (1988-89), before returning to Cleveland as player-coach of the Cleveland Crunch in 1989. He retired as a player after the 1991-92 season when the MISL, by then named Major Soccer League folded. The Crunch moved to the National Professional Soccer League. Haaskivi served as color analyst on the team's radio broadcasts.

Haaskivi was fifth all-time in points in the original MISL with 683 in 425 games. His 386 assists ranked second. He was an eight-time league all-star selection and named MVP of the 1987 All-Star Game in Los Angeles.

Haaskivi played 12 full internationals for Finland. In a 1982 friendly in Helsinki against England celebrating the Finnish F.A.'s 75th anniversity he scored a penalty as the team lost 1-4.

During the 1990s he served as a director for IMG's soccer academy in Bradenton. He was assistant coach of the U-17 U.S. National (boys) Team. From 2001 to 2004 he was head coach and general manager of Pittsburgh Riverhounds, an A-League soccer team.

Haaskivi is brother-in-law of former star Finnish ice hockey player Matti Hagman and uncle to Dallas Stars Left Wing Niklas Hagman. He is divorced with one son, Olli, and one daughter, Nina.