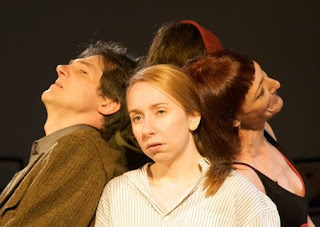 No narrative. No setting. No stage directions. No character names. It's easier to say what "Crave" isn't than what it is.

But because a young, energetic little Cleveland outfit called Theater Ninjas has put so much obvious effort into a gorgeously fluid, mesmerizing production of Sarah Kane's plaint on the illusory promises of love, an effort at describing it is in order.

Kane was a young and bright British playwright who bequeathed us only five intensely poetic plays and one short film, "Skin," when she committed suicide in 1999 at age 28.

Cleveland saw none of her fascinating stage work until this winter, beginning with the Bang and the Clatter's January production of her first play, the apocalyptic comedy "Blasted."

With "Crave," her fourth work, Kane dispensed with the "in-yer-face" violence -- specified in her stage directions -- of her earlier work and anticipated the fragmented introspection of her final play, "4.48 Psychosis."

"Crave" isn't so much a play as a tone-poem for four voices that uses what's called "intertextuality" to refer to sources ranging from the Bible to T.S. Eliot.

These voices, called only A, B, C and M, merge into one voice, each overlapping the others as Kane's threads of imagery and dialogue weave themselves into a cathartic fabric that is simultaneously gauzy and chafing, structures of eggshells and concrete.

"I'm not a rapist; I'm a pedophile." "You're never as powerful as when you realize you're powerless." "Death is my lover, and he wants to move in." "What does that mean?" "Why do you drink so much?" "Because the fags aren't killing me fast enough." "I hate the smell of my whole family." "And if this makes no sense, you understand perfectly."

In this at-times playful, at-times frustrating and always compelling way, Kane takes us deep inside not only her troubled heart, but ours as well, mining our secret lies.

At Theater Ninjas, directors Jeremy Paul and Faye Hargate (she also appeared in "Blasted") fill in the staging blanks by manipulating the four performers in a frantic kinesis around and about the posts and walls of the Asterisk Gallery in Cleveland's Tremont neighborhood.

Sometimes, all movement stops, and the actors meld into a single protean being, one person with four heads, eight arms and a deadly stare. The 50 minutes melt away in what feels like 15.

Terence Cranendonk, one of the city's most physically gifted actors, burns like a Roman candle soaked in gasoline.

He and the rest of the ensemble -- attenuated and quirky Lucy Bredeson-Smith, resonant Val Kozlenko and china-cup translucent Layla Schwartz -- fit together as if they began rehearsing the piece in the womb.

But don't trust this pale description. "Crave" is an event, a happening, and must be experienced. Then you can explain it.