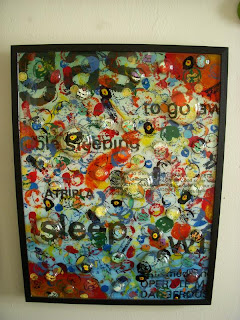 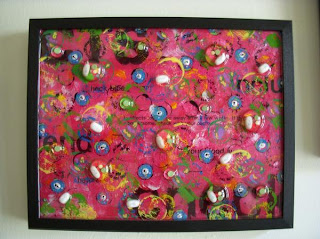 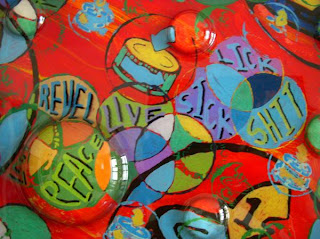 "Rx" is a collection of new works by New York City artist Christopher Sweiger. Several Years ago Christopher tested positive for HIV. Upon beginning treatment in November of 2007 he began to conceptualize a series of work that would chronicle his first year of treatment.

The show is nothing less than his creative and emotional response to surrendering his health to a pharmaceutical industry that he's desperatly tried to not become a part of. All the pieces are made using pharmaceutical related images, and pharmaceuticals themselves in a mixed media format.

Each piece can be seen as a window to his 14 months of ingesting HIV pills. All the frustrating and triumphant things systematically juxtaposed on canvas. The glory of restoring his immune system and also a library of intense dreams and other side effects.

As with life, a few other events shaped his experience. His relocation from Cleveland to New York City and the death of his mother both molded and created this show. His mother was diagnosed with a terminal disease at the same time as his HIV diagnosis. So as not to burden her, he never disclosed his status to her. She passed away July 4th 2008. His pieces began to reflect that loss intertwined with the original concept of Rx. His disease and his mother's disease both changing their lives at the same time.

10% off all sales of "Rx" will benefit the AIDS Taskforce of Greater Cleveland.

Please join us March 6th at 6pm to midnight for a free reception with the artist at:


The gallery will host the show the entire month of march.