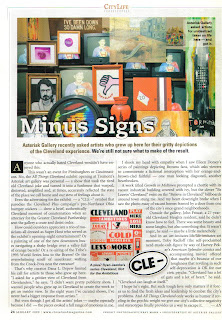 Minus Signs by Andy Netzel - Cleveland Magazine Jan 09
Anyone who actually hated Cleveland wouldn’t have enjoyed this.
This wasn’t an event for Pittsburghers or Cincinnatians. No, the All Things Cleveland exhibit opening at Tremont’s Asterisk art gallery was personal — a show that took the tired old Cleveland joke and turned it into a funhouse that warped, distorted, amplified and, at times, accurately reflected the state of the place we call home and our stew of feelings about it.
Even the advertising for the exhibit— a “CLE –” symbol that parodies the Cleveland Plus campaign’s pro-Northeast Ohio bumper stickers — drew a brief, authentically Cleveland moment of consternation when an attorney for the Greater Cleveland Parthership sent the gallery a cease and desist letter.
How could outsiders appreciate a trio of musicians all dressed as Super Host who served as the exhibit’s opening-night entertainment? Or a painting of one of the new downtown buses navigating a shaky bridge over a valley full of orange barrels? Or a re-airing of the Tribe’s 1995 World Series loss to the Braves? Or the overwhelming smell of sauerkraut wafting from the Crock-Pots near the entrance?
That’s why curator Dana L. Depew limited his call for artists to those who grew up here. “I asked for a grittier view of Cleveland from Clevelanders,” he says. “I didn’t want pretty publicity shots. I wanted people who grew up in Cleveland to create the work to get an insider view. In the eight years I’ve curated shows, I’ve never had a bigger response from artists.”
But even though I got all the artists’ jokes — maybeespecially because I did— the pieces evoked a full range of emotions in me.
I shook my head with empathy when I saw Eileen Dorsey’s series of paintings depicting Browns fans, which asks viewers to commiserate a fictional interception with her orange-and-brown-clad faithful — one man looking disgusted, another heartbroken.
A work titled Growth in Midtown prompted a chortle with its vacant industrial building covered with ivy, but the clever “Be Leavin’ Cleveland” twist on the “Believe in Cleveland” billboards around town stung me. And my heart downright broke when I saw the photo essay of vacant homes framed by a door from one of the city’s once-grand neighborhoods.
Outside the gallery, John Friscat, a 27-year-old Cleveland Heights resident, said he didn’t know how to feel. There was some beauty and some laughs, but also something else. It wasn’t anger, he said — maybe a little melancholy.
And in an art-imitates-life/life-imitates-art moment, Toby Radloff (the self-proclaimed nerd-made-cult-figure by way of Harvey Pekar’s American Splendor comics and accompanying movie) offered that maybe it’s because of our toughness that reveling in such self-deprecation is OK for our civic psyche. “Cleveland has a lot of guts and a lot of heart,” he said. “Cleveland can laugh at itself.”
I hope he’s right. But such tough love only matters if it forces us to find the fresh ideas and leadership to combat the city’s problems. And All Things Cleveland only works as humor if reveling in the psychic weight we give our city’s collective negativity and stereotypes finally provides us a way to escape it.