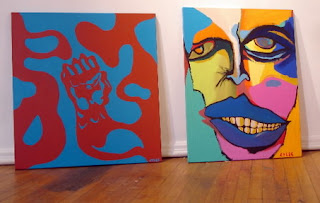 'Blakxtraploitationism' is a group art show on racial diversity: Art Matters
by Dan Tranberg/Special to The Plain Dealer
The show features more than 50 works by 11 artists, all responding to myths, meanings and stereotypes connected with the word black.
Over the past few years, Cleveland-born artist and graphic designer Julius Lyles has devoted himself to curating exhibitions that aim to promote greater understanding of racial diversity. They've been held at such Northeast Ohio venues as Spaces, Doubting Thomas Gallery, the Cleveland State University Art Gallery and the gallery at Youngstown State University.
His latest effort, a group show titled "Blakxtraploitationism: A Visual, Social, Political, Racial Interpretation," opens with a reception from 6 to 10 p.m. Friday at Asterisk Gallery, 2393 Professor St. in Cleveland's Tremont neighborhood.
With more than 50 works by 11 artists (including Lyles), the show is exceedingly inclusive, favoring content over artistic achievement. Lyles said he wants to expose artists who may not have any history of publicly exhibiting their work. Consequently, some of the work on view is amateurish, and the overall selection is highly varied in terms of technical mastery.
That's not to say the show is without merits. In fact, it's quite interesting, in part because the work was chosen expressly to represent a challenging range of views on the subject of race -- a topic that many local galleries tacitly avoid.
Lyles himself is anything but squeamish. His own paintings are done in diverse styles, ranging from the boldly graphic to the wildly expressionistic. One of his larger canvases is a word painting against a depiction of an upside-down American flag, declaring a long list of personal attributes preceded by the phrase "Entrance into the United States of America is strictly prohibited to."
The list isn't limited to ethnicities; it also includes "smokers, drug addicts, homosexuals, people with mental disabilities, people without computer skills, people without bank accounts" and numerous other categories, suggesting that America has become hyper-intolerant of anyone who isn't a white-collar, heterosexual Caucasian male.
Other artists in the show are more symbolic in their approach. Ronald Clayton makes figure paintings on old plywood, which he said he gathers from crack houses and abandoned buildings in the region.
"I paint on refuse about my own experience," he said.
One of his largest paintings is a variation on a traditional Madonna and Child, showing a black woman who has just given birth to a white baby. In her hand, the new mother holds a bright white mask, while the newborn holds a similar mask painted black.
One interpretation of the painting is that the mother needs to pretend she's white in order to provide for her child, while the child needs to pretend he's black in order to appease his mother.
A group of photographs by Tericka Henderson is subtler. Her "Invisible People" series is based on black-and-white images of homeless people, which she shot last year on a trip to Peru. Each image in the series is treated with a different process to suggest a gradual transformation of her subjects from ghostlike to fully formed.
That process is echoed with sculptural frames Henderson made to surround each work, which range from frail and sticklike to visually weighty and substantive.
Lyles, who began pursuing art as a child in summer workshops at the Cleveland Institute of Art, studied graphic design at Kent State University in the 1980s and then returned to school five years ago to study photography at Cleveland State University. While he has exhibited his work in Ohio, New York, Chicago and elsewhere, and continues making new work, he is devoting more and more time to his work as a curator, with plans for three to four exhibitions a year.
He referred to that role as a kind of "forced alter ego," keeping him resolute in his ongoing quest to provide platforms for artists who might otherwise remain unseen.
The show runs through Saturday, May 3. Call Asterisk at 330-304-8528 or go to http://www.asteriskgallery.com/
Tranberg is an artist and writer living in Cleveland.